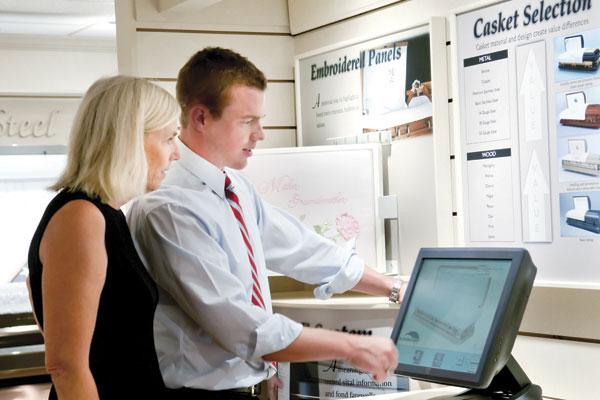 They're young. They're cool. And they're… funeral directors?

Yes, such people do exist. And their insights into their profession might make you rethink everything you thought about it.

Another thing they might make you rethink? The need for life insurance, being that they see firsthand the role a good policy plays in covering final arrangements—and in providing for those left behind.

Thirty-year-old funeral director Todd Harra hasn't just organized hundreds of services. He’s also coauthored Mortuary Confidential: Undertakers Spill the Dirt, a tell-all collection of short stories about being a funeral director, and served as Mr. January in the 2008 edition of the Men of Mortuaries male calendar. (Both sold very well.)

“I like my job’s personal interaction and that each day is different—though that can be the most aggravating part,” says Todd, a fourth-generation funeral director who often works during major holidays.

Easing the stress of a loved one’s passing is preparation. “People are so grateful when life insurance kicks in to pay for a service,” he says. (As we reported in “Why do funerals cost so much?”, the average funeral costs $9,111.)

Unfortunately, not all cases are so smooth. “I've seen a lot of sad situations in which we've had to counsel families into a less expensive service with a more economical casket, eliminate the limo service or even switch to a cremation instead of a full burial,” says Todd. “You see family members dipping into their 401(k)s, scrounging for a loan or requesting donations to cover funeral expenses in lieu of flowers.”

For Lori, a career in the funeral industry happened by chance. “I researched funeral homes for a class in grad school,” the 37-year-old wife and mother of two teenage girls remembers. “I thought it would be a good fit for me, so I decided to do an apprenticeship.”

Her hunch was spot-on. “I love helping people, and I feel like I’m making a difference,” says Lori, who works at the oldest African-American-owned and run mortuary in Columbus, Ohio, and has written and blogged about her profession for a variety of outlets. “I walk families through a difficult time and help them plan a celebration of their loved one’s life. I don’t deal with the dead—I deal with the living,” she says.

“I see families all the time scaling down a service or delaying it a week so they can borrow money,” she says. “It’s so worth it to have even a small policy to take care of arrangements—not to mention taking care of the loved ones left behind.”

She continues, “I have a policy and wish others would educate themselves. I often see how even a small, inexpensive policy can help a grieving family immensely in the aftermath of someone passing.”

Caleb always wanted to help people, but he never thought his sixth-generation family business would be the vehicle to do that. Instead, he did overseas humanitarian work. But that funding stream dwindled, so he returned home—to the funeral home, that is.

Since then, the 30-year-old has launched “Confessions of a Funeral Director,” a blog featuring his insights into the profession, the grieving process and mortality. It attracts 20,000 to 30,000 readers every month—and the eye of 20/20, which recently broadcasted a clip of Caleb’s musings on being a funeral director.

“We are like mainstream pastors who provide comfort to those in pain,” he explains. “Some people do paperwork—we do people work.”

Still, there’s only so much he and the staff at the 162-year-old Wilde Funeral Home can do to ease certain pains. “Every few months, I plan the service of a deceased breadwinner who had no contingency plan,” says Caleb, who bought a life insurance policy before adopting a son earlier this year. “I remember one gentleman who passed away unexpectedly without a life insurance policy, leaving his wife and four kids to fend for themselves—it was incredibly sad.”

Exacerbating the problem is the growing trend of funeral homes requiring full payment up front. “We don’t do it, but families facing that situation undergo a massive amount of stress, especially when they have to downgrade a service,” he says.

Though he acknowledges that it’s hard to talk about dying, Caleb says there are many benefits to doing so.

“Planning ahead for the unexpected can help you live more fully and have peace of mind knowing your loved ones will be taken care of.”

Life insurance isn't something any of us want to think about—but your loved ones will appreciate it when you do.

To make the process as easy as possible, contact your trusted ERIE Insurance Agent. He or she is there to provide thorough information about ERIE’s full array of competitively priced life insurance products.

To get an idea of the kind of coverage you need, check out the Life Insurance Calculator at erieinsurance.com.

These funeral directors have seen it all and recommend life insurance. It can help ease the burden of covering the final arrangements for a loved one. /blog/why-life-insurance-really-matters Erie Insurance https://www.erieinsurance.com/-/media/images/erieinsurance/erieinsurancelogo.png

Does Your Life Insurance Policy Offer This Surprising Benefit?

The insurance products and rates, if applicable, described in this blog are in effect as of September 2012 and may be changed at any time.