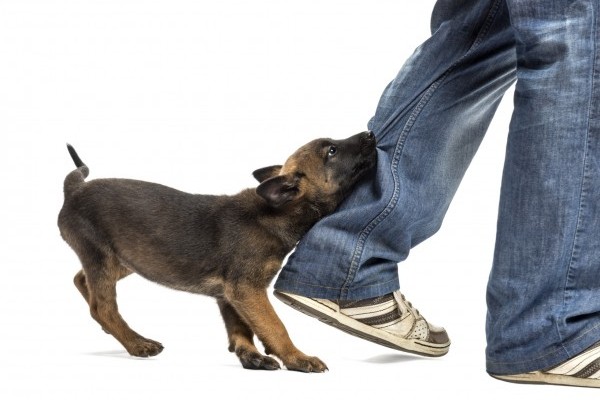 A professional pet trainer explains why dogs bite—and what you can do to prevent your pooch from causing harm.

Cute, cuddly, loyal and smart—it’s no wonder dogs hold the title of “man’s best friend” and that 39 percent of American households own at least one dog.

So why is it that our canine companions bite humans 4.7 million times every year in the United States?

“Dogs aren’t just big toys,” says Mychelle Blake, a certified animal behavior consultant with 10 years of experience with the International Association of Animal Behavior Consultants and Chief Executive Officer of the Association of Pet Dog Trainers (APDT), a professional organization of animal trainers. “Even normally well-behaved dogs may bite if they feel nervous or threatened.”

A number of environmental triggers can cause even a well-behaved dog to snap. “Any dog can bite anyone at any time,” maintains Blake. Some of the most common triggers include defending territory, puppies or food; being confronted by a stranger or an unfamiliar situation; being taunted or provoked by someone; and suffering from an injury or illness.

Lou Russell, a claims examiner who’s been with ERIE for 16 years, has handled approximately 100 dog bite claims during his career. One recent case highlights how even a friendly dog can lash out. In it, a young child was left alone with an unfamiliar dog; when the child accidentally stepped on the animal’s tail, the dog bit the youngster.

“Homeowners assume that their dog is friendly since he’s sociable with their own kids,” says Russell, “but it can react completely different around other people’s children. Most of the cases I examine involve a dog who’s normally tame having an unexpected reaction after being triggered.”

The two most helpless groups of people—children and senior citizens—suffer the most dog bites. In half of all dog bite cases, the victim is 12 or younger. What’s more, many of these injuries occurred around the vulnerable head and neck region.

Even if you swear your dog is sweeter than Lassie, you’ll still want to take a few precautions to make sure it stays calm around other people and animals.

If you’re about to be bitten

Dogs issue plenty of warning signals that they’re about to pounce. Here are signs that you may be in harm’s way.

If you notice any of these warning signs, your best course of action is to stand still with your hands at your side. Refrain from making noise or eye contact with the dog—in most cases, he’ll lose interest and leave.

If the dog knocks you down, roll up into a ball, cover your face and neck, and remain still.

Still suffered a bite? Keep in mind that even a small cut could require a rabies shot, a tetanus shot, antibiotics or stitches—so definitely seek medical attention ASAP.

While it’s true that dogs can be dangerous, a little training and a few precautions can go a long way when it comes to preventing bites.

Next, learn about how insurance can respond in the event of a dog bite.

A professional pet trainer explains why dogs bite—and what you can do to prevent your pooch from causing harm. /blog/how-to-prevent-dog-bites Erie Insurance https://www.erieinsurance.com/-/media/images/erieinsurance/erieinsurancelogo.png

How to Plan a Road Trip Vacation

The insurance products and rates, if applicable, described in this blog are in effect as of June 2013 and may be changed at any time.