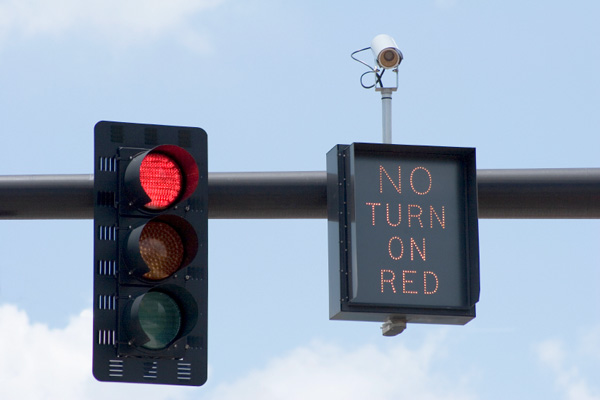 Red light cameras might not sound like a bad idea when you consider that a study from the Insurance Institute for Highway Safety (IIHS) found that 22 percent of urban crashes were caused by drivers who ran red lights, stop signs and other traffic controls. What’s more, injuries occurred in 39 percent of those crashes. That came out to 118,000 injuries and 714 deaths in 2011.

The most promising way to get red light runners to halt might be right light cameras, which have been keeping a watchful eye on drivers since first appearing in New York City back in the 1990s.

Red light cameras are an affordable and efficient alternative to increasing the police presence at busy intersections. Today, more than 500 U.S. cities have red light cameras. These include metropolitan areas like Baltimore, Chicago, Cleveland, Philadelphia and Washington, D.C.

Several developments led to that uptick. Anne McCartt, vice president of research at the IIHS, says longer commutes and more time spent in cars means road safety has become a more important issue for many motorists. Plus, word is spreading on how effective the cameras are.

“The research that we and others have done shows that red light cameras are consistently effective in reducing violations, crashes, injuries and death,” she says.

A 2011 IIHS study compared large cities with red light cameras to those without and found that cameras reduced fatal red light running crashes by 24 percent. An earlier IIHS review of international red light camera studies concluded that the devices lower violations by 40 to 50 percent and reduce injury crashes by 25 to 30 percent.

What’s more, McCartt notes that there’s also a “spillover effect” from the road signs and publicity announcing the cameras’ presence. They tend to make drivers be on better behavior at all intersections, not just ones with red light cameras.

“We think that’s a big part of the safety benefit with automatic enforcement,” she said. “The more communities do to publicize the cameras, the bigger the spillover effect will be.”

After reviewing local traffic research research, communities will then decide to install cameras at high-traffic intersections with high rates of crashes or red light running violations. Sensors monitor when the light is green, yellow or red. When a driver passes through an intersection after a light turns red, the car trips the sensor to indicate that a violation occurred.

Based on a review of the photograph, a ticket is mailed to the owner of the car associated with the license plate. Laws allowing automatic enforcement vary from state to state—right now, traffic safety cameras are allowed in about half of U.S. states.

Just because research clearly shows that red light cameras reduce traffic accidents, injuries and fatalities doesn’t mean everyone is sold on the idea.

For starters, some people are concerned that they interfere with motorists’ privacy and with traffic light synchronization. Others argue that the cameras have more to do with generating revenue than about preventing accidents and saving lives. Still others say the motorist is at a disadvantage since ticket recipients aren’t notified quickly, there are no witnesses to the violation and drivers aren’t always well identified in photographs.

Today, there are anti-red light camera websites, online petitions and Facebook® pages. The American Civil Liberties Union of Connecticut recently opposed four bills permitting red light cameras on the basis that the lag time before receiving a ticket makes it difficult for alleged violators to recall details and challenge the ticket.

So what happens to your insurance premium if you scoot through a red light (accidentally, of course) and get caught on camera?

“In most states, nothing,” explains ERIE’s Dave Freeman, vice president, Personal Lines Underwriting. “Unlike a ticket issued by a police officer, most jurisdictions count a red light camera ticket as a civil citation (like a parking ticket) rather than a moving violation.” That means the ticket is issued to the owner of the car instead of the driver—which means no points on your license and no insurance implications.

Still, it doesn’t mean you’re off the hook. Freeman says you can pay a fine ranging from $25 to $500. And in Arizona, California and Illinois, drivers who run red lights have points added to their licenses.

If you get pulled over by an actual officer for running a red light, then it’s a different story. That’s considered a moving violation, which could affect your premiums.

To help prevent rate increases, consider ERIE Rate Lock®* (not available in Maryland, New York or North Carolina). This policy endorsement freezes your auto premium year after year even if you file a claim. Your rate only changes when you add or remove a vehicle or a driver from your policy or change the location where your car is garaged.*

*Limited to three years in Virginia. ERIE Rate Lock® does not guarantee continued insurance coverage. Insured must meet applicable underwriting guidelines. Premium may change if you make a policy change.

The most promising way to get red light runners to halt might be right light cameras, which have been keeping a watchful eye on drivers since first appearing in New York City back in the 1990s. /blog/red-light-cameras Erie Insurance https://www.erieinsurance.com/-/media/images/erieinsurance/erieinsurancelogo.png

So You Want to Buy an RV