Former Seattle Seahawks wide receiver Emmett Johnson first showed a flair for football when he was 10 years old. “My dad was a big time basketball player—I’m not really sure where my love of football came from,” says the Maryland-based Erie Insurance Agent. 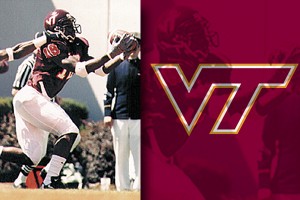 Emmett’s skills were strong enough to land him a spot on the Virginia Tech football team and later in the NFL with the Seahawks. “I played two seasons with Seattle during 2002 and 2003 before moving on to the Montreal Alouettes (a Canadian Football League team),” says Emmett, who now enjoys life after football as an entrepreneur.

It was during preseason training in Canada that Emmett’s football career came to an abrupt end after he tore his Achilles tendon. Fortunately, he had a backup plan.

“In college, my head coach Frank Beamer told us that a football career is short,” he says. “My Plan B was always to be an entrepreneur. I wasn’t sure what I was going to be doing, but I wanted to work for myself.”

In 2005, Emmett accepted a position as an agent and then a branch manager for a different insurance carrier. His dream of being self-employed came true in 2011 when he opened Mid Atlantic Insurance Financial, an independent insurance agency in Laurel, Md.

Here’s what he thinks about his life after football—and how football prepared him for his new career.

Did professional football prepare you for owning your own agency?

Absolutely, and in many ways:

What is your favorite part about being an ERIE Agent?

Being an Agent lets me have an entrepreneurial spirit. ERIE views the relationship with its Agents as a partnership; I truly feel like they’re helping me grow while still letting me be independent.

What’s the most challenging part of your job?

I started out as a scratch Agent, so I had to build my business one brick at a time. I wasn’t experienced as a business owner and I had to learn a lot of things all at once.

I really enjoy helping fellow business owners. Many of them are up for contracts, but they can’t get them without insurance in place. They’re often frantic and confused when they come to my office, and they don’t know where to start. They totally trust me to give them the coverage they need. I enjoy helping them put together a plan so they can go after their dreams.

How many employees do you have?

I have two, including my wife, Asia. She and I have three children: Makiel (9), Corey (8) and Reagan (2). My two boys help with small jobs like stuffing envelopes and putting together welcome kits. As they get older, I’ll give them more challenging jobs. A nice thing about having an agency is that my children can take it over at a later point if that’s what they want.

What do your kids think about the Seahawks being in the big game this Sunday?

We are all excited! My oldest son was born in Seattle and they are his favorite team, so we will be inviting a few friends and family members to our home to watch the game. We definitely want to make this a big deal for Makiel because you never know when your team will make it back to the big game!

After life as a football player, isn’t insurance a little boring?

No one wakes up and says, “I want to be an insurance agent when I grow up.” Yet people who stumble into it tend to stay forever. Once you work in insurance, you realize it’s far from boring. Every day is different and it’s fulfilling to help your Customers.

Have your children expressed an interest in playing football?

Both of my boys are in flag football; they’ll be moving to tackle this fall. My oldest son Makiel loves it while his younger brother Corey is more creative and loves art. We play a lot in the backyard for fun, and I coach their flag football team. Coaching can be a little stressful because some of the parents will say, “That guy played in the NFL, we better not lose!”

What Businesses Should Consider for Hybrid Work

The insurance products and rates, if applicable, described in this blog are in effect as of July 2022 and may be changed at any time.