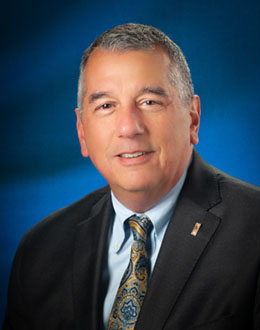 NeCastro joined ERIE in 1996, starting a career that has spanned finance, services and sales.He managed ERIE’s Internal Auditing Department and was then promoted to senior vice president of the Controller Division in 1997. He moved into operations in 2008 as senior vice president of the Product and Policy Services Division. He expanded his experience to field sales operations in 2010, when he was promoted to senior vice president and regional officer. His territorial oversight included Ohio, Indiana, Tennessee, West Virginia, Illinois and Wisconsin. In 2014, NeCastro led ERIE’s entry into its 12th state, Kentucky.

Prior to joining ERIE, NeCastro worked for The Plastek Group in Erie, Pennsylvania, as director of finance. He previously worked for 10 years progressing through senior manager at Ernst & Young, one of the then "Big Five" public accounting firms, in its Cleveland and Erie offices.

An Erie native, NeCastro is a graduate of Cathedral Preparatory School and earned a bachelor's degree in accounting from Gannon University. He serves on the boards of the American Property Casualty Insurance Association, Insurance Information Institute, Erie Regional Chamber and Growth Partnership and UPMC Hamot, as well as the Gannon University board of trustees. He is a founding board member and president of the Erie Downtown Development Corporation’s board of directors.