ERIE, Pa. (April 3, 2018) – Of the more than 172,000 people killed in car crashes over the past five years, one in 10 were in crashes where at least one of the drivers was distracted. That’s according to data analyzed by Erie Insurance housed in the Fatality Analysis Reporting System, a nationwide census of fatal motor vehicle traffic crashes maintained by the National Highway Traffic Safety Administration. Erie Insurance consulted with the Insurance Institute for Highway Safety in its analysis and released the data to coincide with Distracted Driving Awareness Month.

The analysis found being “generally distracted” or “lost in thought” was the number-one distraction involved in fatal crashes. (See below for the full top 10 list.)

“Some people see driving as a time to relax and unwind and let their minds drift off, but that’s actually one of the worst things you can do,” said Jon Bloom, vice president of personal auto, Erie Insurance.  “Most people know about the dangers of texting while driving, but daydreaming while driving is an almost invisible distraction – people do it automatically without realizing the risk.”

“One effective strategy to counteract daydreaming is to keep your mind alert with so-called passive forms of engagement, like listening to a radio show or a podcast,” said Dr. Atchley. “The beauty of passive engagement is that your mind will automatically tune it out when it needs to. So, if something out of the ordinary suddenly happens in your environment, your brain won’t even hear what’s on the radio anymore. It will be fully focused on the task at hand.”

Dr. Atchley offers these additional tips to help drivers keep their attention on the road:

The Erie Insurance analysis of police data from 2012-2016 showed the majority of drivers who were distracted were “generally distracted” (inattentive, careless, or distracted – details unknown) or “lost in thought,” all of which are interpreted as daydreaming. In fact, police report that 61 percent of distracted drivers were daydreaming at the time of a fatal crash, compared with 14 percent of drivers who were distracted by cell phone use.  Erie Insurance did a similar analysis five years ago and revisited the data to see if the types of distractions had changed over the years. The analysis found the distractions were largely the same.

“We’re always looking after our customers; we want to not only insure their cars but also protect their lives,” said Bloom, “so that’s why we’re drawing attention to the dangers of distracted driving, including driving while daydreaming.”

Below are the top 10 distractions involved in fatal car crashes:

Outside person, object or event, such as rubbernecking

Other occupants (talking with or looking at other people in car)

Using or reaching for device brought into vehicle, such as navigational device, headphones

Moving object in vehicle, such as pet or insect

Bloom said that because FARS data on distraction is based largely on police officers’ judgment at the time of the crash, and because people involved in a crash may be reluctant to admit to distracted driving behaviors when being interviewed by police, the numbers are difficult to verify and may, in fact, under-represent the seriousness and prevalence of driving distractions.

Check out this video to hear what drivers daydream about behind the wheel, and their reactions after learning the risks. 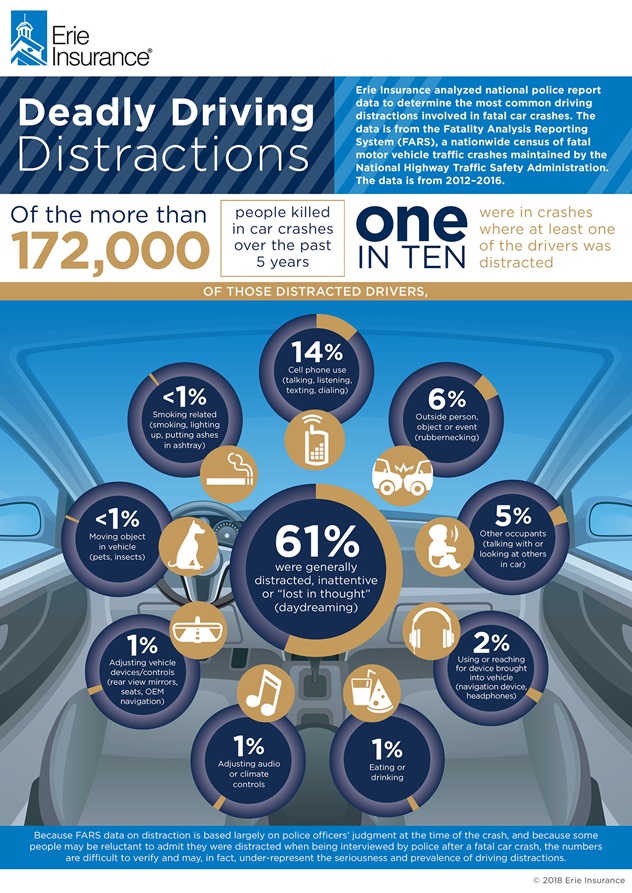