Erie Insurance started out with the vision of two men to create an insurance company like no other… one that emphasized customer service above all else. This is the story of that vision—the journey that took ERIE from its humble roots in 1925 to a FORTUNE® 500 company with more than 6,000 employees and 6 million policies in force today.

Two men with a dream ... both worked at the Pennsylvania Indemnity Exchange (PIE) from 1922 to 1924, but were not happy with the pay and conditions. By fall 1924, the wheels were in motion to start their own company. When they resigned from the PIE, the company had to hire six salesmen to replace them!

The two founders – H.O. Hirt and O.G. Crawford – had a plan, which they wrote on a 10-cent tablet (today’s equivalent of a business prospectus), but they needed money. It took 3 months and 20 days – about the length of one Erie winter – to raise the $31,000 they needed, winning over 90 stockholders with their hand-written business plan, their tenacity and their true belief in what they were about to do.

On April 20, 1925, the Erie Insurance Exchange was born – one of the first policies written was on H.O.’s own Dodge touring car. The company’s mantra became “The ERIE is Above all in SERvIcE,” with the “erie” raised in the word service. That still serves as the company’s tagline today.

Evidence of this service was that customers were encouraged to call collect. And if a policyholder had a problem with a claim, he or she could make a phone call directly to H.O. Hirt.
After only three years, ERIE was already expanding. A second office was opened in Pittsburgh in 1928. The company took its first steps outside of Pennsylvania in 1953 when it opened a branch in Silver Spring, Maryland.

At the same time ERIE was expanding its territories, it also expanded its product offerings. In 1934, ERIE introduced the “Super Standard Auto Policy.” It included many features that have since become industry standards. Fire insurance was added in 1940, and inland marine in 1954.

As ERIE expanded outside of Pennsylvania, the product offerings continued to grow.

In 1961, it introduced its first homeowners insurance policy, the Pioneer Home Protector policy, and was officially considered a multi-lines insurance company. The Pioneer Business Protector policy was created two years later. And Erie Family Life Insurance Company was born in 1967. CEO at the time, F. William Hirt, H.O. Hirt’s son, referred to it as his “million-dollar baby.” The company tracked its success by what H.O. Hirt called “The Pyramids of Progress,” which showed the year, net premiums, policyholder surplus and assets. For example, in 1925, net premiums were recorded at $29,790, compared to more than $3 billion in the 2000s. More offices opened across the Mid-Atlantic, Midwest and South. In 2014, ERIE expanded into its most recent state – Kentucky -- and now operates in 12 states and the District of Columbia with more than 20 field offices. Learn more about the company’s history through our timeline.

The company was going strong and growing. Within the first two decades, Erie Insurance went from a two-man show to a nationally recognized company.

The founders had very high principles in mind when they started the company on April 20, 1925.  And ERIE’s founding purpose has never been lost sight of since.

From the four lone pillars that stand at ERIE’s corporate headquarters to the nostalgic service pin, there are several items that are symbolic of Erie Insurance. Here are just a few:

Chairman of the Board Tom Hagen, a student of history like his father-in-law, H. O. Hirt, has taken an active role in the revitalization of Erie’s historic neighborhoods and restoration of some of the city’s treasured homes and public buildings.

He’s earned several awards for his efforts, including the Otto Haas Award for outstanding individual achievement from the Pennsylvania Historic Preservation Society. The top award honors individuals and organizations for preserving historically and architecturally significant properties in Pennsylvania.

Our work to simultaneously preserve and further develop the neighborhood around our Home Office shows that companies can provide for the needs of a modern business, while respecting and honoring the history of a community.

THOMAS HAGEN, CHAIRMAN OF THE BOARD

Learn More About Our Historic Buildings

The Charles M. Tibbals House, built in 1842, was designed in the Greek Revival style, one of only three that currently exist in the Erie area. It was home to the Tibbals family for more than six decades. Charles Tibbals, Sr. was a highly respected and successful entrepreneur, merchant, public servant and manufacturer.

The Tibbals House, located on East Fifth Street across from ERIE’s Home Office, and the four adjacent historic Federal Period houses were acquired in poor condition and restored by ERIE in 1984. The Tibbals House and the four houses are knowns as “Federal Row,” and are listed on the National Register of Historic Places.

In 2010, the Tibbals House was renovated for use by ERIE as a conference center on the first-floor of the main house, with three guest suites in the rear addition and second floor.

Tom Hagen and Erie Insurance received an Award of Merit from the American Association for State and Local History Leadership in History Awards for the publication, The Historic Tibbals House – 1842. It’s the most prestigious recognition for achievement in the preservation and interpretation of state and local history. 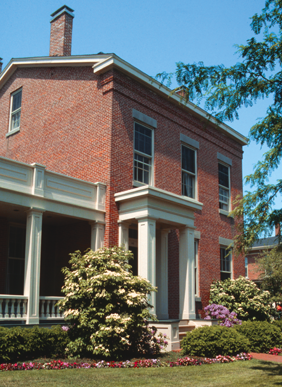 The Gideon Ball House on East Sixth Street is across the street from the H.O. Hirt Building at ERIE’s Home Office and was acquired and restored by ERIE in 1992. It’s an Italianate-style mansion built in 1862 for the Honorable Gideon J. Ball, who was active in Whig politics. In addition to several local public offices, Ball served as state treasurer of Pennsylvania.

Before it was restored for office workspace, the Erie Armory was home to the Pennsylvania National Guard 112th Infantry Regiment. For 90 years, the men and women of the regiment came to the Armory for training, deployment and to reunite with friends and family following their return home.

The dedication of the 95-year-old building, which is about three blocks east of the Home Office on East Sixth Street, included a historical marker commemorating the Pennsylvania National Guard 112th Infantry Regiment.

The 112th Infantry Regiment is part of the famed 28th Division, the oldest continuous infantry division in the U.S. Army. The 112th was originally known as the Pennsylvania 16th and can be traced back to the American Civil War. The 112th served in the Spanish-American War, World War I and Iraq, and earned Presidential Unit Citations in World War II and Korea.

The 112th used the Armory until July 2007 and then relocated to the then newly constructed Pennsylvania National Guard Readiness Center near Cambridge Springs, Pennsylvania.

The Armory was added to the National Register of Historic Places in 1989. ERIE’s restoration of the 24,000-square-foot building followed the requirements from the Pennsylvania Historical and Museum Commission for Historical Landmarks.

The Boston Store Livery and Garage on French Street across the street from one of ERIE’s parking ramps was acquired and restored by ERIE in 1986. It was built in 1906 and from 1916 to 1961 it was the livery and later garage for the delivery vehicles of Erie’s iconic Boston Store. It’s the only livery building left from that once important trade on lower French Street. It was donated by ERIE to the Experience Children’s Museum, which is adjacent to the Erie Art Museum. 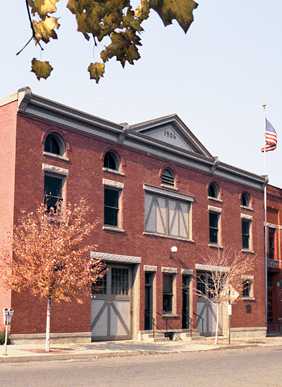 1906 The Boston Store Livery and Garage

Two historic houses, Judah Colt and Von Buseck, were dismantled from their original locations and relocated to the corner of East 5th and German Streets in Erie in 2018.

The Judah Colt House, built in 1820, was originally located at the southwest corner of 4th and French Streets. The federal style house was home to Judah Colt, one of Erie County’s earliest citizens and the first Burgess of Erie. In 1825, Major General Marquis de Lafayette, a Revolutionary War hero, visited the home during his “Farewell Tour” of the 24 states that were then in the U.S. The house later became home to Judah Colt’s nephew Thomas Colt, who was the last burgess of Erie and the first official mayor of Erie in 1851. In 1882, the home was cut in half and moved to East Front Street to make room for the construction of Erie Steam Bakery, which is currently known as Lafayette Place and owned by Erie Insurance.

The Von Buseck House, built in 1815, was located on the south side of West 38th Street between Asbury and Millfair Roads in Erie. The saltbox farmhouse resided on land owned by one of Erie County’s earliest immigrant settlers John Nicholson. It was remarkably the home for generations of the Von Buseck family for 150 years. Both historic houses were purchased, restored and converted by ERIE into upscale apartment buildings. Each house has two apartments. Residing behind the historic homes are two carriage houses with two additional apartments and garages.

Erie Insurance purchased the Firehouse, located at 414 French Street, in Erie, Pennsylvania, in November 2015. After an extensive renovation, the two-story building reopened in July 2017 as an employee event center for meetings and conferences.

The Constable Brothers Construction Company built the 13,500-square-foot building in 1907-1908 at the cost of $14,889. Firehouse No. 1 had a long history of fire protection for its ward. The Erie Fire Department stopped using the station in 1979, and new owners converted the building into a restaurant.

The Pufferbelly Restaurant opened for business in July 1984, and Erie Insurance Chairman Tom Hagen likes to tell the story of being the restaurant’s first customer. The restaurant was a staple in Erie’s downtown for over 30 years until it closed on September 30, 2015.

The Firehouse has meeting space on both floors to accommodate about 120 people. Artwork by regional artists is on display inside the modernized facility. Among the pieces from Erie Insurance’s art collection is a restored mural by artist William de Leftwich Dodge that is more than 100 years old. 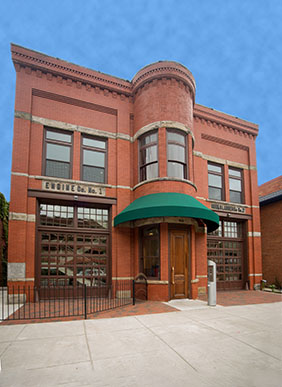 1908 The Event Center at the Firehouse

This is a special place where ERIE’s rich history is captured and displayed. Employees and agents can learn how an Erie-based start-up business in 1925 became a FORTUNE® 500 company and a recognized leader in the insurance industry.

The center is located in the historic C.F. Adams Building, which was Erie Insurance’s second office from 1938 to 1956. The Heritage Center chronicles the story of Erie Insurance and its humble beginnings. It features nine galleries with a variety of images and objects from ERIE’s extensive archives, such as the building’s restored Grueby Tile fireplace, and founder H.O. Hirt’s recreated pine-paneled office, along with his 1964 “Silver Sand” Lincoln Continental.

Go back in time and take the Heritage Center virtual tour. 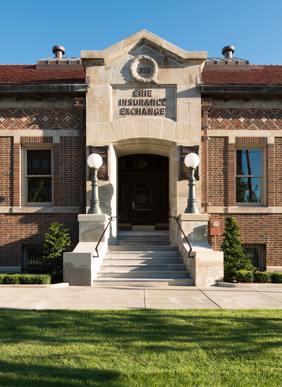