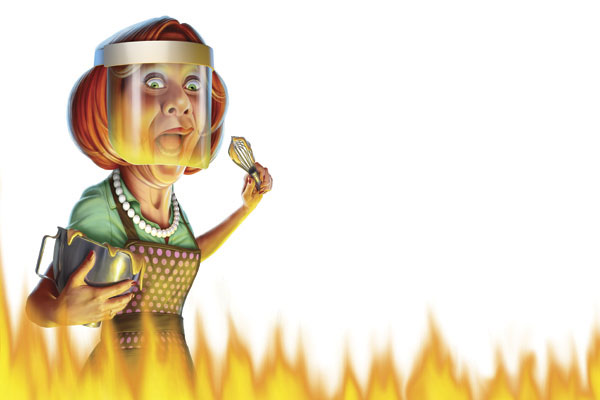 Flour may seem harmless, but many people don’t realize that it has a hot temper. Under certain conditions, foods like flour are highly flammable and can result in fiery kitchen situations.

Combustible foods are part of the reason why cooking is the leading cause of home fires in the United States, with one in eight households suffering from a fire each year. Poultry cooked in turkey fryers is an obvious culprit, but the following everyday cuisine can also become a recipe for ruin if not handled properly.

Why it’s risky: This potent food is packed with lots of natural oil, so it burns quickly and pops when placed in a hot pan, causing oil to splatter into the burner.

Why it’s risky: Any protein product that has a high fat content like bacon releases grease as it’s cooking. When the meat burns, it causes the oil to splash out of the pan.

Staying safe: Don’t let the grease escape by ensuring that the pan is deep enough to contain the fats. Also, if you’re cooking several batches of bacon, get rid of the old grease before cooking a new batch. Drain the oil out of the pan and into a jar or bowl (which should be kept far from the stove).

Why it’s risky: When stuffed peppers are submerged in frying oil, the air flow is constricted. This pressure can force the peppers to explode open, and if there are open burners next to the pot of peppers, the oil may fly onto the open flame.

Staying safe: Do not fill the pot to capacity with oil. It should only reach halfway up the pot. Also, make sure the burners nearby are off.

Why it’s risky: Powdered goods like flour, non-dairy creamer and powdered sugar consist of fine particles that burn if added to a hot pan without anything else in it. Plus, if these items spill into the direct flame, they can ignite.

Staying safe: Only add the powdered ingredients to a pan with another ingredient in it, such as butter. And never throw flour onto a pan fire! (Use baking soda instead.)

Why it’s risky: It’s not uncommon for marsala, sherry and other alcohol-based sauces to flare up. These flames are often controlled, but the danger arises when the bottle is too close to the stove. If the sauce container is next to the flame, eventually the bottle could explode.

Staying safe: To avoid a bottle bomb, keep it away from the stove.

6. Peanut brittle and other ultra-sugary foods

Why it’s risky: If you’re making sugary dishes like peanut brittle or flan, proceed with caution. When sugar gets very hot, it can create flames in a flash.

Staying safe: Control the heat, and never walk away. “You need to stay there (in the kitchen) from start to finish,” says Chef Di Stefano. “Sometimes people may get a phone call and walk away. Then, all of a sudden they have a big fire and have to replace the kitchen.”

ERIE offers home, auto, business and life insurance. For more information on how to protect your home from fire damage, contact your ERIE Agent.

Keep your cuisine from turning on you

Following the guidelines below will reduce your risk of a culinary catastrophe:

If a fire does break out in your kitchen, here’s what you should do:

ERIE covers home, auto, business and life insurance (plus, you can save on home insurance with each additional policy you add through ERIE—auto, business auto, personal catastrophe liability or a qualifying life policy). For more information on how to protect your home from fire damage, contact your ERIE Agent.

Flour may seem harmless, but many people don’t realize that it has a hot temper. Under certain conditions, foods like flour are highly flammable and can result in fiery kitchen situations. /blog/six-flammable-foods Erie Insurance https://www.erieinsurance.com/-/media/images/erieinsurance/erieinsurancelogo.png

Checklist: How To Winterize Your Home To Save Money and Energy

The insurance products and rates, if applicable, described in this blog are in effect as of May 2012 and may be changed at any time.